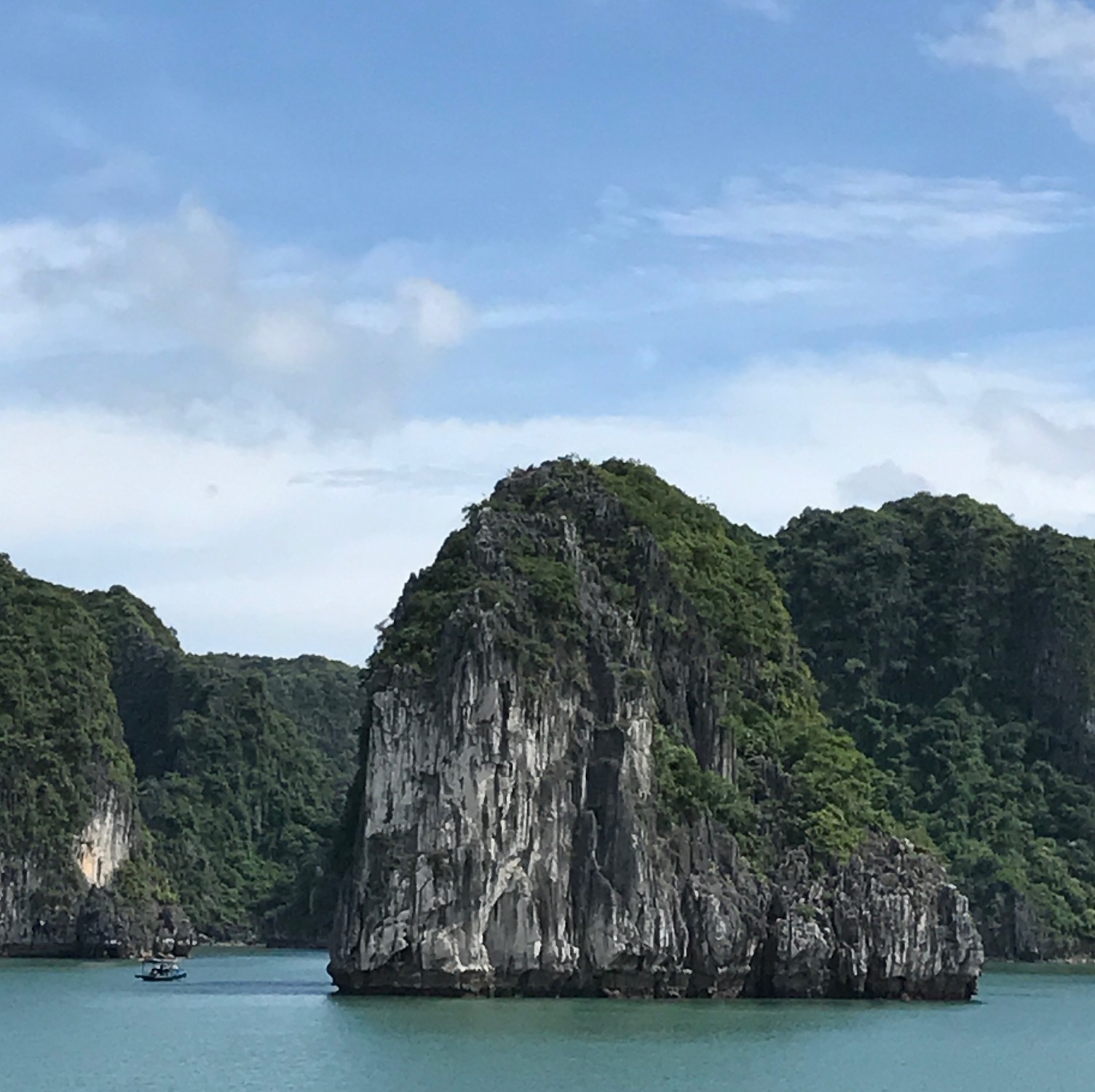 Recently I’ve decided I like boats. I mean, I’ve always enjoying a little bob-about on the sea, but more recently (ie. this trip), I’ve decided I really love being on a boat, to feel the gentle rock of the ocean and the sea breeze in my fro. I think it’s that water thing again.

So it comes as no shock that I was more than a little excited at reuniting myself with Poseidon whilst preparing to sail through the magnificent Ha Long Bay.

Perched in the North East of Vietnam, and designated by UNESCO as the World Natural Heritage Site in 1994, the bay consists of a dense cluster of some 1,600 limestone monolithic islands each topped with thick jungle vegetation, rising spectacularly from the ocean.

Taking advantage of parental needs, I begrudgingly (not) set sail for a 2 day, 1 night adventure aboard the Dragon Legend 2, part of the Indochina Junk fleet. A rather luxurious cruise liner, it features 24 luxury cabins, 4 decks with both inside and outside restaurants, a pool, a spa, a bar, and a sundeck area. A real drag I tell ya.

Unlike our contemporaries who sail through the main part of Ha Long Bay itself, the Indochina Junk has been granted permission to sail though Bai Tu Long Bay to the north, which gifted us with an almost private experience of the bay and all its wonders.

I swear it must say in the guide-book of all these types of adventure cruises that plying your guest with so much food they can’t move is the key to success. And not that I’m complaining, our 8-course lunch was amazing. Abundant with local seafood and fresh salads, it provided me just enough energy to plonk myself onto a banana lounge on the sundeck and watch the incredible view roll by. 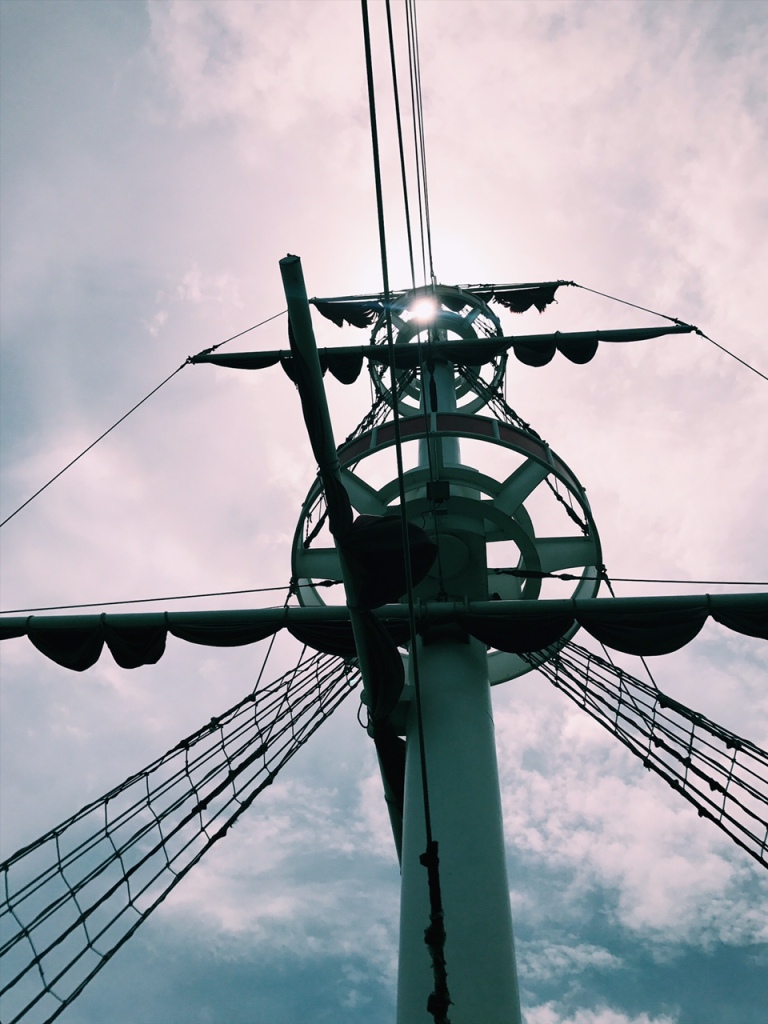 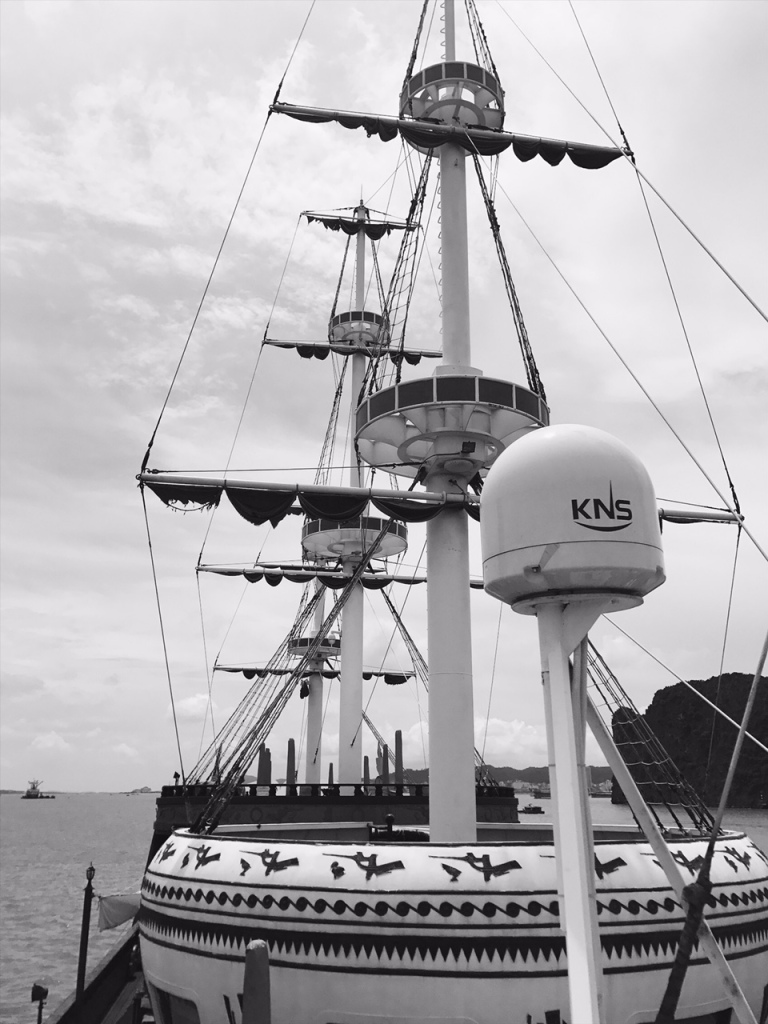 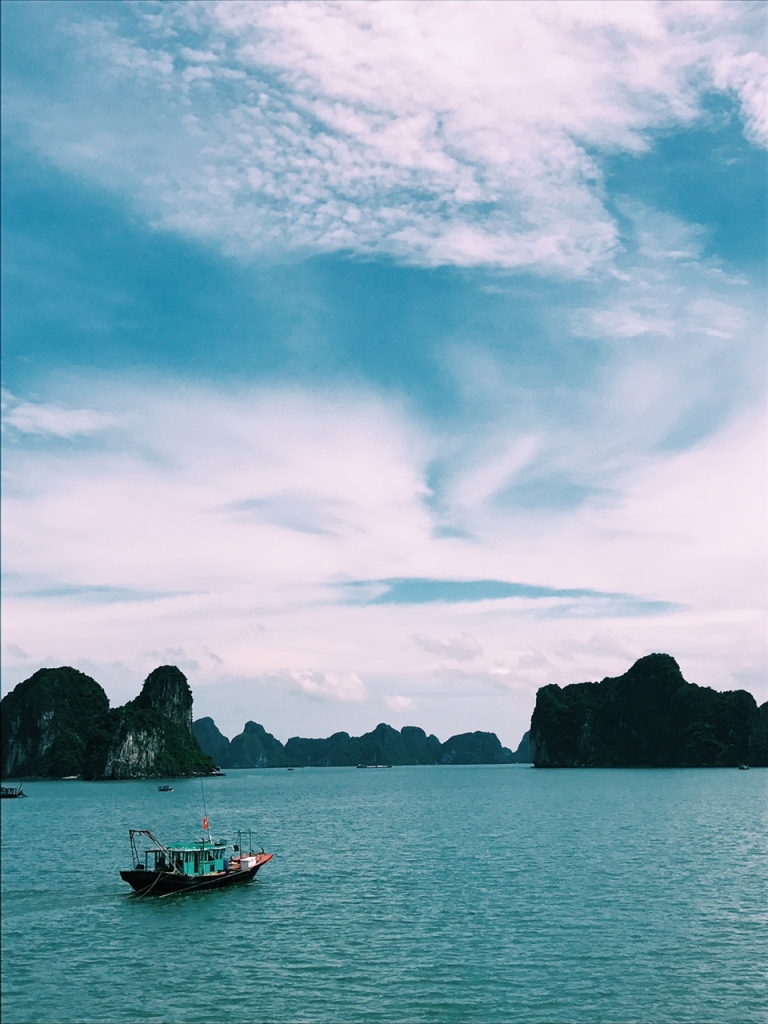 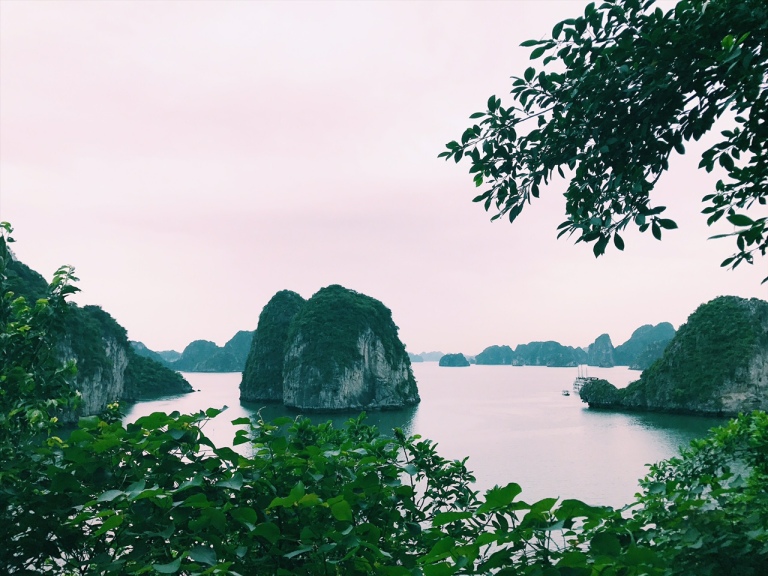 An hour or so later we were summoned for the afternoon’s activities, which included kayaking and swimming in the teal blue waters. Paired with a lovely girl from New York, we paddled, sometimes rather vigorously around the incredible islets and stared in wonder at the families and locals who still call the seas their home. The sea itself is quite salty and the current strong, so it helps to be a confident swimmer should you decide to have a splash about post-paddle. 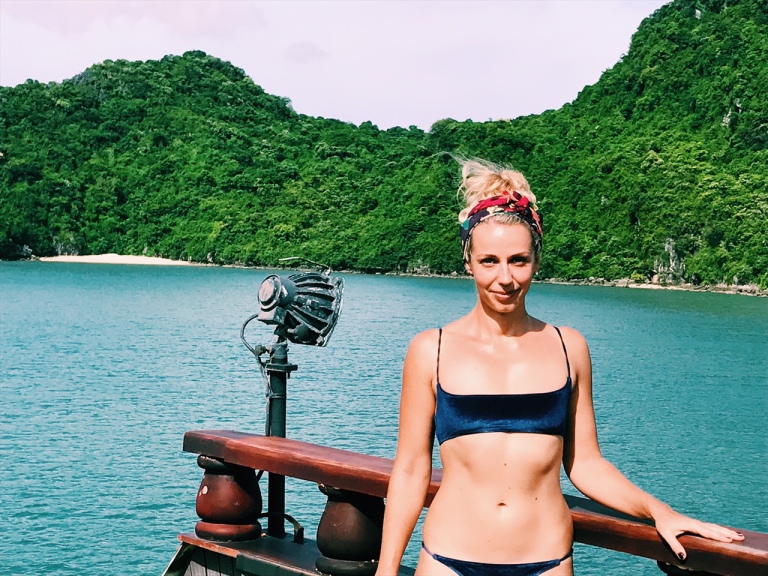 Thoroughly exhausted from the incidental cardio workout, we had some downtime before indulging in another multi-course extravaganza, accompanied by an unexpected music and a magic show by the self-proclaimed Harry Potter (which included having to kick both geriatrics at the table awake at various stages).

High on the joy of having my own room (it’s the small things ok), I was comatosed by 10pm, all in preparation for our morning Tai Chi on the sundeck. 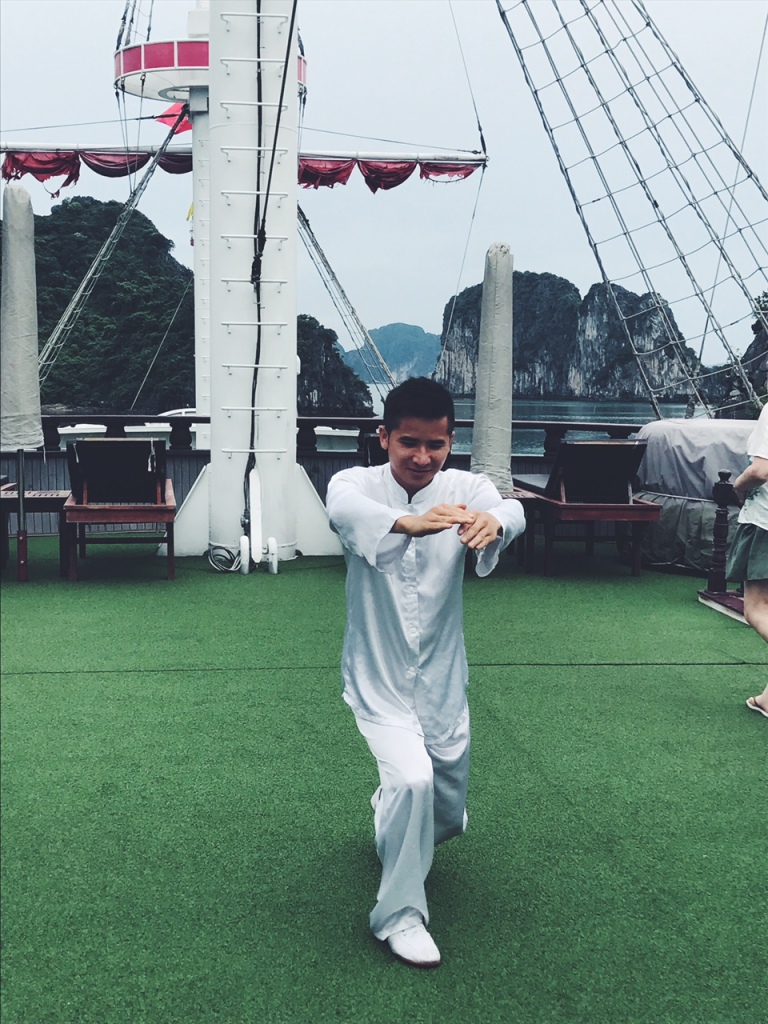 Like most staff on the boat, receptionist Lucky wears many hats, including waiter, housekeeping, and Tai Chi Master. The handful of us that managed to rise in time were privileged to enjoy the serenity of Lucky’s teaching, to the backdrop of some of the most incredible scenery known to man kind. And admittantly, with my dad stumbling around behind me, it was more than a little difficult to stifle some morning giggles.

Post-breakfast saw a visit to one of the many caves located on the inlets, its limestone heart producing some incredible stalactite and stalagmite formations (and taking me back to that grade 3 science project). 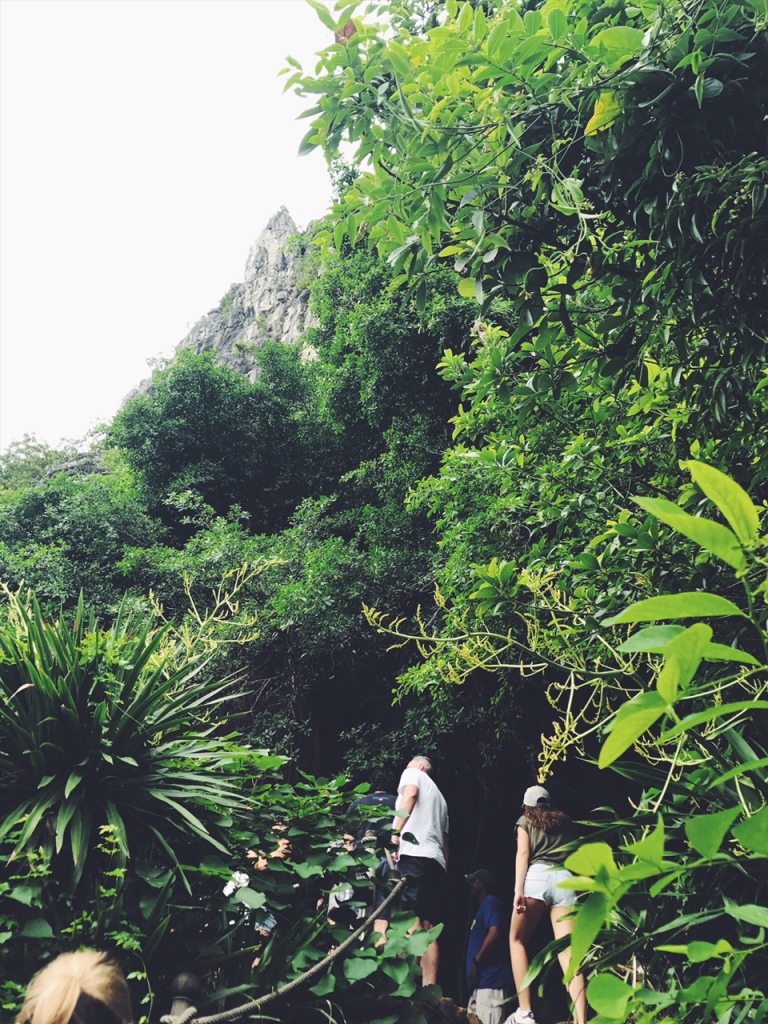 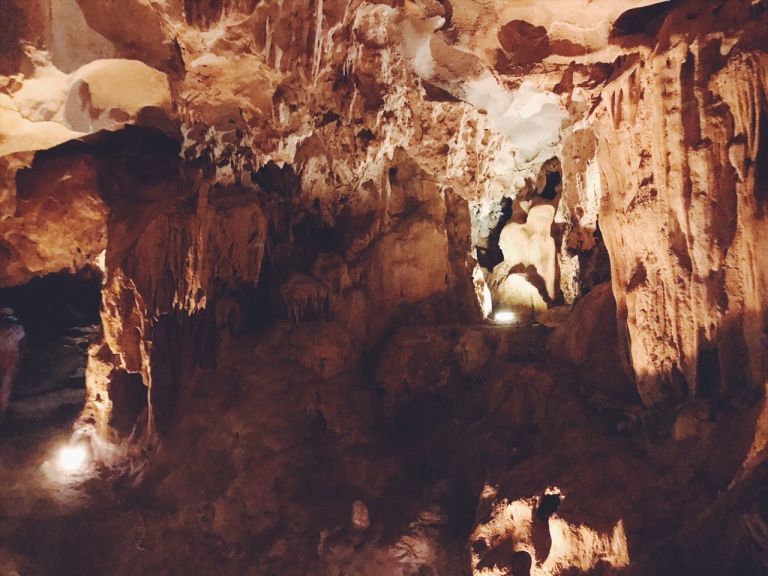 We were also treated to a little history of the site. And because I can’t remember exactly what it was, here’s what the good folks at Wikipedia had to say:

The name Hạ Long is derived from the Sino-Vietnamese 下龍, meaning “descending dragon”.

According to local legend, when Vietnam had just started to develop into a country, they had to fight against invaders. To assist the Vietnamese in defending their country, the gods sent a family of dragons as protectors. This family of dragons began spitting out jewels and jade. These jewels turned into the islands and islets dotting the bay, linking together to form a great wall against the invaders. Under magics, numerous rock mountains abruptly appeared on the sea, ahead of invaders’ ships; the forward ships struck the rocks and each other.

Whatever you believe, there’s no questioning the sheer magnificence of the area, and just how powerful and magical mother nature can be. 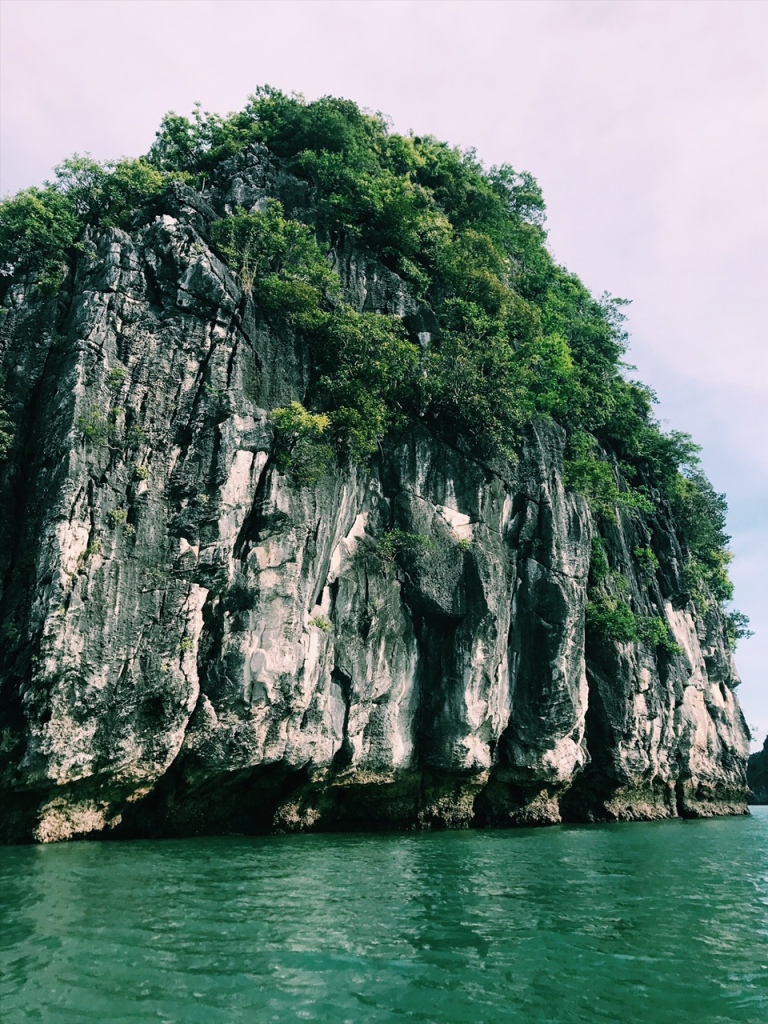 And with that, our time on the high seas was over, as we enjoyed one last gaze out across the limestone formations as our ship headed in to shore. 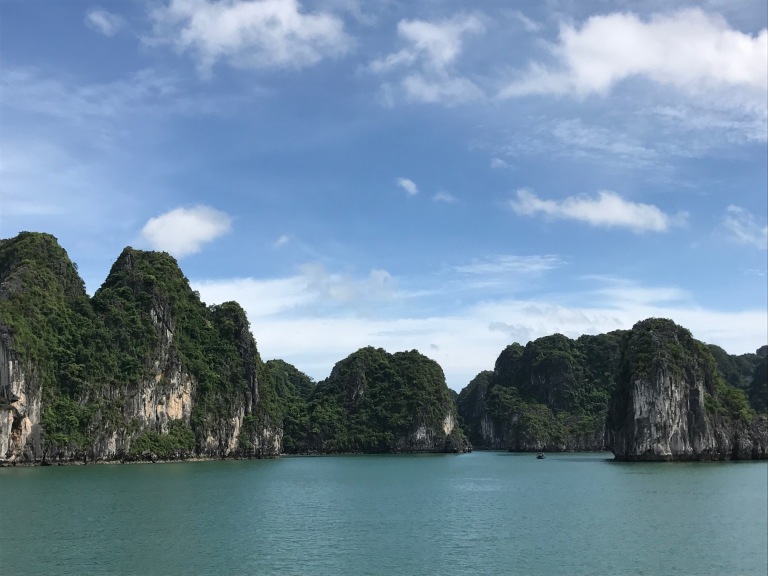